Comparison is made for interchanges which allow higher speeds also on the left directional ramps and thus ensure greater traffic capacity:

With this radius, the difference in the area of the interchanges is even more pronounced. Stack Interchange has an area of 79 ha and Turbine of 260 ha. The remaining interchanges need an area of 142 ha.

2. Lengths of ramps and overpasses

Stack Interchange, Turbine and Cloverleaf have a completely straight lines when driving through. ITL Interchange has a slightly longer distance due to the separation of carriageways. Pinavia has an even longer distance because lanes run along the circle.

Construction for right directional ramps is similar in all cases. ITL Interchange and Stack Intercgange have the shortest lenght of ramps. The Cloverleaf and Pinavia have an approximately double length, and Turbine, due to its size, has about a triple length according to the most favorable variants.

However, construction for left directional ramps totally differs. There are the greatest differences between compared interchanges. Ramps mostly lead over the overpasses. ITL Interchange has an extremely short length of ramps. A little longer distance is in the Cloverleaf, but due to the small radius, there is a lower speed limit. The distance is greater by factor 2 on Stack Interchange and more than by factor 3 on Pinavia and Turbine.

More technical data for each interchange and comparison with horizontal radiuses R = 250 m and R = 550 m: 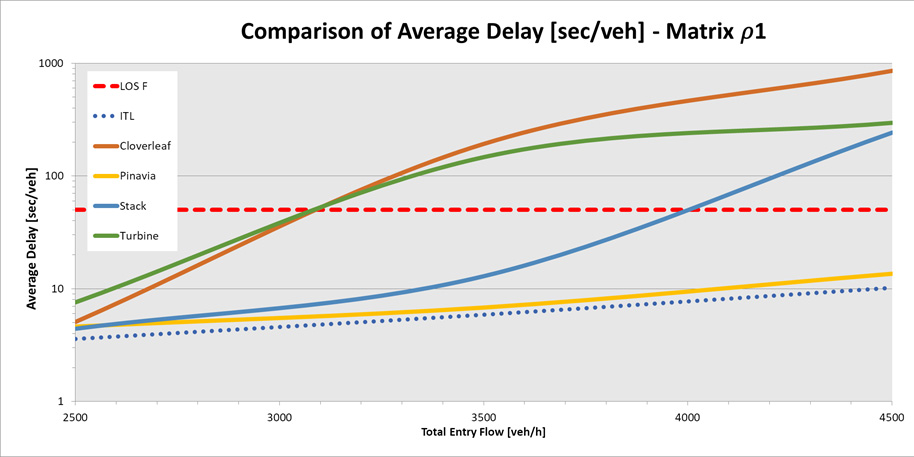